Small businesses need to stay on top of their accounting practices. Understanding how money comes in and when it goes out ensures that a business is managing its cashflow properly. Managing your vendors in QuickBooks can be summarized in 5 simple points.

END_OF_DOCUMENT_TOKEN_TO_BE_REPLACED

QuickBooks Simple Start is the free basic edition of QuickBooks. It is easy to install and learn, and can easily manage any size or type of business organization. These are the steps you will take to setup and use this powerful accounting and money management system.

END_OF_DOCUMENT_TOKEN_TO_BE_REPLACED

Intuit App Center has changed recently, and these changes affect everyone who is in any way involved in QuickBooks and the App Center itself. Ordinary consumers, consultants who use the software and developers working on apps all have to adapt to these changes in order to make the best possible use of the App Center. While the Intuit Marketplace apps are not affected, many other apps may be because of the recent changes.

As of the 1st of August 2012, native and federated applications that integrate into Intuit App Center for user accounting and billing have additional support requirements. Such apps now need to provide a level of primary support for Intuit Sync Manager inasmuch as it relates to the use of their apps. Any kind of FAQ, instructions, error codes and other sources of information reflect this change. Fortunately, this does not directly affect apps that directly connect to QuickBooks Online due to the monthly subscription and its revenue recognition feature.

The first step of any issue a user cannot find a solution to through documentation is to contact the developer. Beyond the developer’s ability to solve the problem, Intuit may be contacted for additional assistance. Thus, anyone who must depend on a feature that he or she is not completely confident in should become highly familiar with the feature and any potential problems associated with it. This may minimize the potential problems associated with support difficulties as developers adapt to the new rules.

Your user checklist would include :

No Free or Trial Extension Possibilities

An additional change that took place at the beginning of August 2012 is that the federated and native apps are no longer free from any developers within the App Center. No developer may offer free apps, nor may they offer free trial extensions of apps or other services. While developers who have converted to the Intuit Anywhere service are immune to this new rule, any users who have current free trials must upgrade to paid versions of their apps in order to continue using them.

Users and consultants who have grown used to free apps need to adjust their plans and budget accordingly to upgrade and purchase where necessary. Consultation agreements involving several copies of important apps could require additional compensation to cover the costs of, which could require a raise in consulting fees. Regular users may have to curtail the use of some apps because of the new costs, and may need to more carefully consider taking on apps that offer a free introductory period.

The burden of understanding rests on users and consultants. With the likely raising of prices and the fact that there are no more free offerings, knowing the apps thoroughly before purchasing them is crucial.

Your user checklist would include :

In the end, every routine user of the Intuit App Center is going to need to adapt their usage to some extent. While the changes are fairly small, and many do not directly impact the use of QuickBooks, these are still important changes. The cash flow and pricing structures of everyone whose living depends on the use of apps obtained through the Intuit App Center will need to adapt in order for the developers and consultants to continue operating. Even the standard users are going to have to change the way they use and acquire apps because of these recent changes.

Small businesses in the area now can work more efficiently thanks to the most recent release of Intuit’s infamous QuickBooks software for accounting. QuickBooks is well known for its ability to simplify Planning>Business Management, giving its users the ability to create invoices, send them off to clients and even monitor cashflow as it happens. Millions of small businesses around the world already use QuickBooks, and the 2013 edition only makes its use even more efficient.

With a new design, small businesses no longer need to focus on figuring out what features are where; everything is more intuitive, allowing users to focus more on developing products and building their own brand. All of the features from previous versions are still present, but now everything is sorted out into the software, designed for optimal efficiency.

Intuit’s vice president noted an increase in the number of small businesses starting to use QuickBooks and similar financial management systems, although a number of them still have to deal with the difficulty of manual management–about 33 percent of all small businesses. Because of this, Intuit designed QuickBooks 2013 to be more intuitive and easier to use for any small business, allowing them to save on management while building their brand and prospering.

Some small business owners who tested the beta version of the software agreed that one of the most important parts of the business was to make sure that they always know where the money is at any given time, and QuickBooks 2013 has been able to follow through with ease from installation all the way to every day functionality. It permits its users to monitor receipts, payments, finance tracking and professional invoices, making it easier for users in the long run and saving them time that can be better spent elsewhere.

QuickBooks 2013 uses three independent values to make sure that anybody can use the product with ease and total understanding. A survey conducted in 2012 among testers for the beta version of the software agreed that the changes promoted efficiency through visual cues and other useful things:

There are other changes to QuickBooks 2013 that decrease task completion time and increase speed and optimal efficiency:

Inuit also listened to the users and their suggestions for how to improve future versions of QuickBooks. For instance, the 2013 version now offers larger fonts and tables so users can read tables better, and they can also add notes to their reports for inventory.

The corporate tax year will soon end, and for small business owners that means getting year-end financial statements and tax information ready for filing. Though many people dread the process, tax preparation needn’t be a headache and it doesn’t have to cost a fortune in accounting fees either.

Quickbooks is the most widely used program for small to medium business accounting and it is fully-integrable with TurboTax and other tax programs, making the reporting and filing process seamless and error free.

The main benefits are:

Quickbooks is one of the most user-friendly accounting programs available. Business account set-up takes only minutes and the program offers easy tutorials as well as business and tax tips.

Business account templates cover almost every type of account for nearly every business type and corporate structure. Unnecessary categories can be deleted and you can customize the templates or add your own categories.

This program is the most trusted name in business accounting currently on the market. It is updated frequently to reflect changes in corporate, federal, and state income tax regulations.

Savings in time and money

Quickbooks is very straightforward and covers a wide variety of business and accounting scenarios. There is little need to purchase other programs or to hire an accountant or tax attorney. This means you save time and financial resources from the first use.

Here are some other ways that you can use Quickbooks to take the pain out of tax season.

Due to the flexibility, organizational structure, and user-friendly nature of Quickbooks, business accounting is just a matter of initial account set-up and prompt data entry. This program performs all of the necessary calculations, so when tax time rolls around all of the information is already for year-end report compilation and importing your income and expenses to TurboTax.

Click here to see our ProAdvisor certifications and reviews 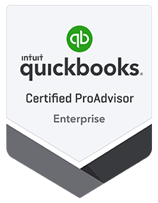 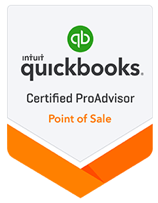 Bernard Roesch is our trusted advisor for anything accounting related. He is a true QuickBooks guru, and when we work with him, we always feel it is money well spent. Bernard understands exactly how a business should be set up for internal and external reporting and has helped us get the most out of QuickBooks. He is fast, efficient, and incredibly talented.